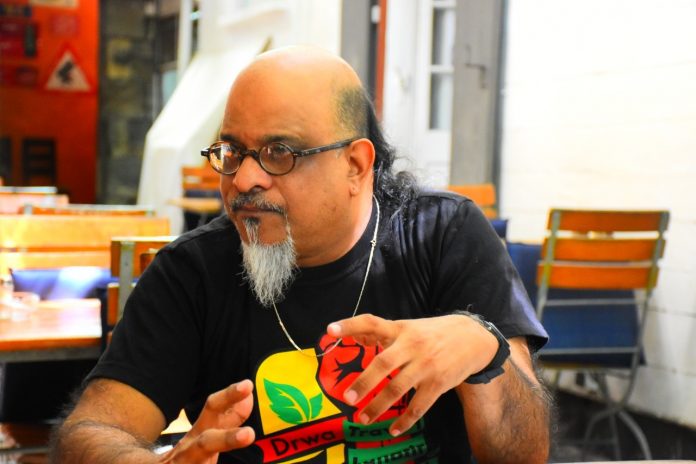 Press Communiqué – (23rd February 2020)
At the Airport of Mauritius Ltd (AML)
• Sordid anti-union persecution ever perpetrated by a State body since independence.
• Call on Prime Minister and members of the National Assembly to act diligently.

This Wednesday 26th February 2020 at 14:30, at AML Conference Room, 5th Floor, Newton Tower, Port Louis, a ‘new’ session of a Disciplinary Committee is being called by AML against Mr. Sharvin Sunassee, the duly elected President of the Airport of Mauritius Employees Union (AMLEU). The only reason for this persecution is that Mr Sunassee has always defended the interest of its members and denounced any malpractices done by the AML Company.

This would be the third session of Disciplinary Committee hearing being called and the fourth wave of Disciplinary processes initiated by AML against the President of AMLEU, since January 2019. From then on, a series of trumped-up charges and ill-usage of disciplinary actions are being concocted, by AML against Mr. Sharvin Sunassee, who is also suspended from duty since March 2019.

The first wave, of this persecution started in January 2019, was disapproved by the Ministry of Labour after the GWF brought the case there.

The second wave was initiated on the 2nd April 2019, when new fabricated charges were brought against the AMLEU President for bringing ‘disrepute to AML Management”. He was accused of an alleged post in a private Facebook page, on the night of 30-31 March 2019. In parallel, Mr Sharvin Sunassee was suspended from duty with immediate effect and the office of the union was seized by AML. The Disciplinary process, ensuing from the second wave was stopped by an Order, no less than the Supreme Court of Mauritius on the 10th of May 2019, on the ground that the AML flouted the disciplinary procedures found in the Procedure Agreement. AML undertook to re-instate Mr. Sunassee in his post in the Supreme Court.

However, after the Supreme Court Order, in the space of 24 hours, on the 11th of May 2019, a third wave of disciplinary process started anew, on the same false charge of posting on Facebook on the night of 30-31 March 2019. A new suspension from duty took effect, even before the previous one was lifted! The first session of the Disciplinary Committee called by AML on the 13th June 2019, was postponed by AML.

And for more than 6 months, AML opted not to call any Disciplinary Committee. Instead, the Management openly backed up a group of AML employees who fraudulently, illegally and undemocratically attempted to oust the elected executive President and office bearers, of AMLEU in an attempt to take control of the AMLEU.

On the 17th of January 2020, a second session of the Disciplinary Committee (DC) was held. The Management called its main witness, Mr. Prashant Purmessur, who is non other than the so called ‘Secretary’ of the group that perpetrated the ‘coup’ against the elected executive members of the Union. He was supposed to ‘testify’ and ‘produce evidence’ that Mr. Sunassee posted on AML Staff Corner on the night of 30-31 March 2019. On cross-examination, the main witness could not prove that the said post was made on the night of 30-31 March 2019, which is the very root of the accusations against Mr. Sunassee. A motion was made by Me. Yashley Reesaul, lawyer of Mr Sunassee, for either the employer to remove all the screenshots presented in the DC as evidence or to present a new witness from the employer side to call and testify that such post was effected 30-31 March 2019. Me. Reesaul called for a ruling on the issue. The President of the DC, Me. Marylou Subramanien, requested a short postponement for Monday 20 January 2020. However in the morning of Monday 20 January, the said Disciplinary Committee was postponed.

In the meantime and in parallel, the Registrar of Association, called the bluff of the pro-management lackeys, called “Ad-hoc Committee”, who perpetrated the ‘coup d’état’ within AMLEU.
The truth of the last 11 months of AML manoeuvrers started to be unveiled: the attempt to behead a Union of its President, to annihilate AML employees trade union’s rights and to place a trade union of employees under its control, was falling apart.

What was the reaction of AML potentate? They initiated a fourth wave of Disciplinary Process!

They called a new (third) session of the Disciplinary Committee, this Wednesday 26th February 2020, BUT decided to alter completely the very root of the charge against Mr Sharvin Sunassee. He is now being accused of posting on Facebook, not on night of the 30th -31st March 2019, but on the night of 29th -30th March 2019!

This is completely absurd, abusive and is an ill-usage of disciplinary actions, violates all the principle of natural justice, is a totally illegal manoeuvre, and even constitutes a clear violation of the Supreme Order of the 10th of May 2019. It confirms that AML since day 1, is using disciplinary process as weapon of persecution and persistent harassment against a union President.

How can employer substantially modify a charge against an employee, in this case a Union’s President, after 10 months?

How can an employer suspend an employee on the basis of a specific charge for 10 months, to then after presenting his case in in a Disciplinary Committee, alter the very root of the said charge?

How can an employer, after having made solemn affirmation in an affidavit before the Supreme Court that a “clear act of gross misconduct which is already ascertained”, [i.e. have been verified to have been committed on the 30-31 March 2019], now alter the said charge?

It is now ‘ascertained’ that AML, a State Owned Company, has been caught in its act, “en flagrant délit’ of committing one the most sordid anti-union persecution ever perpetrated by a State body since the independence.

The question which arises then is:

• Is the Prime Minister, Hon Pravind Jugnauth aware of what is happening or not?

If yes, can he explain to the nation why his government is perpetrating this crime?
If not, can he act diligently as from this Monday, to stop this sordid persecution, and bring the potentate of AML to order?

• Are members of the newly elected National Assembly aware of situation at AML?
If yes, why are they silent?
If no, will they raise their voices to stop the sacking of a union’s President?

As negotiator of AMLEU and the GWF, I call on all unions and democratic forces of the country to stand by the AMLEU President, Mr Sharvin Sunassee on Wednesday 26th Feb 2020 at 14:00, at the AML Conference Room, 5th Floor, Newton Tower, Port Louis, and in any future actions to stop the sordid anti-union persecution being committed by some potentate in the Public Owned Company, AML. It is a democratic duty to defend the right of trade unionism in Mauritius!